Girl Guides Australia seeks to promote friendship among the girls and women of all nations as a contribution to peace and understanding.

Permission to hold an international event is obtained from the Board of Girl Guides Australia following a request from a State Girl Guide Organisation.

The National Coordinator-International for Girl Guides Australia must be kept informed of all planning and progress.

Invitations from Australia to other countries

Invitations to other countries are sent only by the National Coordinator-International.

Invitations from other countries to Australia

Any invitation from another country for Guides from Australia to attend an overseas event must be referred to the National Coordinator-International.

A member intending to live overseas permanently or temporarily for more than 12 months may apply to the State International Manager for a transfer using an Overseas Transfer Form.  This is arranged between the National Coordinator-International, Girl Guides Australia and the International Commissioner of the other country.

Members representing Australia at overseas events must wear the correct uniform. Refer to the Uniform page on the GGA website for specific requirements.

Members to travel to and from official events in uniform.

A girl or woman of another nationality is accepted as a member in Australia if she:

She may be appointed as a Leader/Manager in accordance with State regulations.

If she is a temporary resident, either the Australian uniform or that of her home country may be worn. Badges of both countries can be worn on either uniform. The World Badge may be worn as the Promise badge.

For the crediting of badges and certificates earned overseas, application should be made to the relevant authority in the State.

A member who has made the Guide Promise prior to arrival in Australia makes a reaffirmation of that Guide Promise. She may then wear the Australian Promise badge.

Refer to paragraph 1.3 Membership above.

International appointments are made at Australian, State and in some cases, Region levels.

Any unit may have links with other units.

Through a combination of non-formal education programs, leadership development, advocacy and community action, WAGGGS empowers girls and young women to develop the skills and confidence needed to make positive changes in their lives, in their communities and countries.

The World Centre are Our Chalet in Switzerland, Sangam in India, Pax Lodge in the UK, Our Cabaña in Mexico and Kusafiri, in Africa. For more information visit WAGGGS World Centres.

Through their global programs, girls from all over the world come together to learn new skills, share their international experiences and form lifelong friendships.

The Symbols of the Movement

All members of the World Association of Girl Guides and Girl Scouts share the symbols of the Movement. These are:

The Good Turn symbolises the service given by all members of the Movement to the community. A Good Turn is a service given voluntarily by one or more Guides without expectation of acknowledgement or reward. Younger Guides think of ways in which they can do a Good Turn every day. Older Guides and adult members develop this further into service projects at a local, national and international levels.

The left Handshake was introduced by the Founder as a means of easily recognising other members of the movement.

The Motto, Be Prepared, shares the Founder’s initials and is a practical reminder of the educational purposes of Girl Guiding and Girl Scouting.

In giving the Sign Guides and Girl Scouts raise three fingers of the right hand as a reminder of the original three-fold promise. 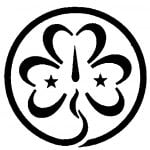 The World Flag consists of the World Trefoil in the upper left-hand corner on a bright blue background. The white blaze in the lower right-hand corner represents the commitment of the World Association to peace. This is crowned by three golden squares symbolising the three-fold promise.

The World Song was adopted at the 13th World Conference in 1950. The music was adapted with the approval of the Finnish composer, Jean Sibelius, from his March Opus 91b. It was originally composed as the march for one of Finland’s oldest Scout companies. First published with English words by Gavin Ewart in 1952, the World Song highlights the principles and spirit of the Movement.

Regional groupings have been established within the framework of the World Association. These groupings are Africa, Arab, Asia-Pacific, Europe and Western Hemisphere. Australia is a member of the Asia-Pacific Region which was formed in 1969.

For further information go to  WAGGGS